What is Encapsulation in C#

Encapsulation is in c# refers to an object’s ability to hide data and behavior that are not necessary to its user. Encapsulation enables a group of properties, methods and other members to be considered a single unit or objec, Encapsulation is also known as information hiding.

Encapsulation is used to restrict access to the members of a class so as to prevent the user of a given class from manipulating objects in ways that are not intended by the designer. While encapsulation hides the internal implementation of the functionalities of class without affecting the overall functioning of the system, it allows the class to service a request for functionality and add or modify its internal structure (data or methods) to suit changing requirements

The following are the benefits of encapsulation

Why do we need encapsulation

The need of encapsulation is to protect or prevent the code (data) from accidental corruption due to the silly little errors that we are all prone to make. In Object oriented programming data is treated as a critical element in the program development and data is packed closely to the functions that operate on it and protects it from accidental modification from outside functions

What is Encapsulation in C# with Example

When we execute above c# program, we will get the result like as shown below. 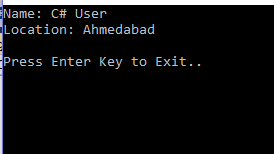 Difference between Abstraction and Encapsulation