The C# language comes with a set of Basic data types. These data types are used to build values which are used within an application. Data Types are useful to define a type of data the variable can hold, such as integer, float, string, etc., in our application.

C# is a Strongly Typed programming language. so Before perform any operation on variables, it’s mandatory to define a variable with the required data type to indicate what type of data that variable can hold.

In above syntax, we have added required data type before the variable name, compiler will check what datatype will hold the variable during the compilation.

If you observe above, C# Data Types with Example, we have defined here multiple variables with different data types that’s we used in our application.

In c# programming language we have different type of data type that’s we have described below. there are mainly three data types are reference data type, value data type and pointer data type.

Here we have represents pictorial diagram about different data types in the c# programming language. 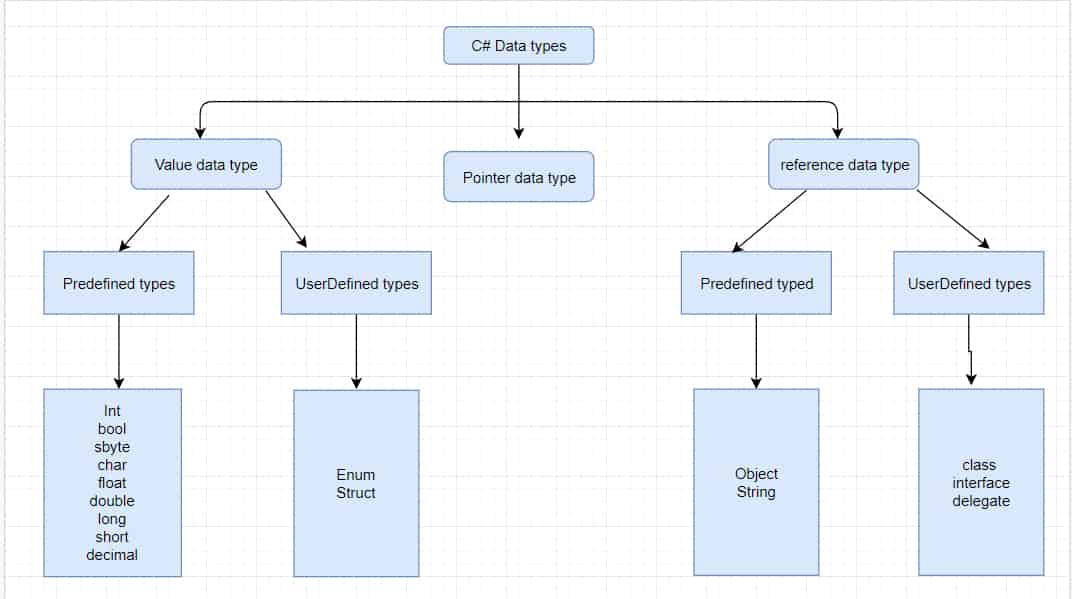 A reference type doesn’t store its value directly. Instead, it stores the address where the value is being stored. In other words, a reference type contains a pointer to another memory location that holds the data.

Following table describes list of reference type  that we have used in c# programming language.

A pointer is a variable whose value is the address of another variable i.e., the direct address of the memory location. Similar to any variable or constant, you must declare a pointer before you can use it to store any variable address.

the Pointer Data Types will contain a memory address of the variable value. To get the pointer details we have two symbols ampersand (&) and asterisk (*) in c# programming language.

Syntax of declaring the pointer type.

Example of defining the pointer.

The Below lists describes different type pointer symbols available in the c#.